I saw a lot of people want to implement Ethernet backhaul, but it seems still under development.
Let's share your comment about Ethernet backhaul? Why do you want it?
Maybe it can give ZYXEL to launch this feature ASAP if possible.

Re: One laptop not working with Multy WiFi, other devices OK

I believe that I have fixed my problem.

The solution was simple. I deleted both Multy devices using the iOS app, reset them, started again, added both and went through the installation process a second time. This time the laptop that previously had some problems works fine.

I also tried splitting the WiFi into 2.4 and 5 GHz bands. That didn't work.

Something must have gone wrong in adding the problem laptop to WiFi the first time around. Not sure what.

I'm documenting this here in case anyone else has a similar problem with Multy WiFi. 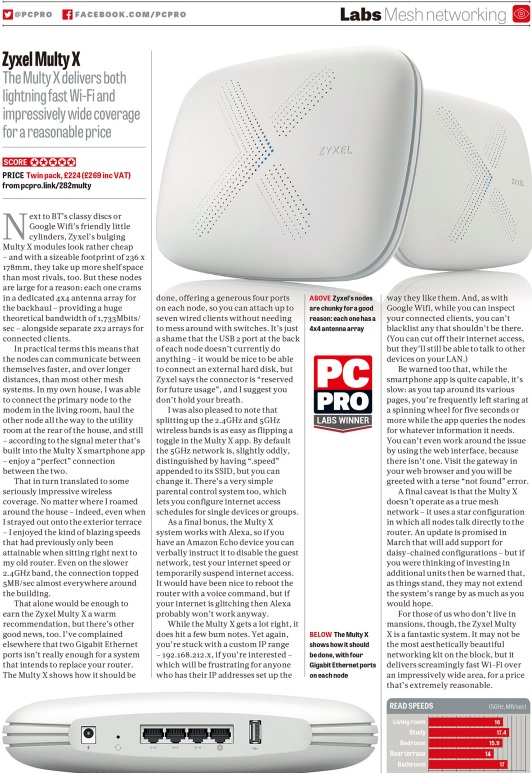 I've lived with the Multy X for a fortnight now and here are my observations:

1. You need to have proper QoS setup by device priority like Linksys Velop allows you to. Not like Google Wifi which is for an hour, but something both on a scheduled and permanent basis up to say 3-5 devices on priority. You should also allow ETHERNET connected devices to be prioritised over Wifi and vice versa.

2. The only time you can check the placement "strength" of connection from the main router to the other nodes is when you set this up. This is impractical. You need to allow one to see at anytime the signal strength between the main router and the nodes so as to adjust the position to gain better throughput overall. Also your signal bar is not very robust. I would suggest along with the colours of RED TO ORANGE TO GREEN TO RED, you have a Bar of say 1- 100 rating. So in the green range, does it mean that when you're further to the right in green it's a stronger signal or is the same a being in the green zone down right in the middle? A benchmark of signal strength in numeric form would help. Example: in the middle of GREEN is say 50, but you can improve it to say 80/100 before it goes into RED which means its too FAR AWAY from the router now. This would be a superb help for us.

3. Auto channel finder would greatly help as a feature as if connected on 5Ghz, I find the speeds over Wifi keep varying. I have a fibre direct connection of 200mbps up and down. Sometimes in the rooms the wifi is full and sometimes its not. While the main connection is rock solid, I feel this is a CHANNEL problem so an option to have "Auto channel optimiser" would really help. But keep this feature optional.

4. For resetting the device, at the moment you have to reset each individual router/node. This is impractical. You should be able to reset the entire system for all nodes at once so that they reset PROPERLY and efficiently.

5. The GUEST WIFI network makes absolutely no sense if the guests are entitled to all the privileges of the main network. However if you create a Guest Network where one can prioritise devices within that network to say have a max bandwidth - that makes really good sense. Example for my connection if I have 200mbps and I want to allot only 20mbps on the Guest Network, then that turns out to be a win win for the owner and the guest. Once should also be able to restrict the amount of data within say an hour or a set of hours - example 3 hours 1GB transfer after which the app alerts you that the quota has been assumed. While I have a massive amount of data transfer, many don't and this helps guests not download heaps of data when over at a friend's place and rid them all off their monthly internet plan which many cheap people do! I've witnessed it!

6. In naming the devices connected to the Multy X you cannot use punctuation. Come on! Every other mesh system allows you to do this. E.g. You now can only say NICK IPHONE. You cannot say NICK'S IPHONE. These small things make you an International company than a Korean one. You really have to set it up in the PERSONAL DEPARTMENT in order to capture all the International market territories. Small things make a BIG DIFFERENCE!

7. In your type of devices list as well, you have a very limited view. For example you have smartphone, laptop, gaming console. But you don't have REMOTES, Blu Ray Players, AV receivers etc. And these have been around for eons. You have some weird ones which I'm sure not many would use at all. Again in this department you really need to see the VELOP or EERO systems to understand how universal they make their apps! I would like to see Apple TV, Amazon Fire TV/Fire Stick, Media Players, Remotes, AV Receivers, Blu Ray/DVD Players, TV etc etc - more commercial devices! Then your QoS should be able to also prioritise devices by KIND as well as by name! This is where it gets more interesting. E.g. For my apple TV I Want 50% bandwidth minimum or be prioritised as highest priority, my iPhone X second and my MacBook Pro 3rd. After that everyone else gets to use what they want.

8. Does Multy X Support MU-MIMO? Is it in-built? If so have you confirmed if it works better by default on or off? Just asking...Maybe have an option in the App to have it on or off as many devices are right now not MU-MIMO compliant. At least I don't think so.

9. No where in the App does it show you where to check your FIRMWARE and if its UP-TO-DATE! This is very worrying. I eventually found it but it should be within the MENU tabs as this is something that is very important. Wifi-Mesh is a very new technology and the one thing we need to check is that we have the latest software for our hardware at all times.

10. The app being a CLOUD BASED info puller is rather slow and clunky. You should have the app NATIVE, and then say once a day when not in use actively pull the data from the cloud and update but when using it it should work like a native app with the speed of a native app. Right now I can't imagine say on a 1mbps connection how long this app would take to move through its various pages - AGES I PRESUME! Because for me on my 200mbps connection it lags and jitters a lot! I'm using an iPhone X.

11. in the devices list we should be able to see details of the connection of each device to the router or nodes and to which nodes. THIS IS ONE OF THE MOST IMPORTANT POINTS: E.g. I would like to see my MacBook connected to say my Bedroom Node, and at 5Ghz and at a transfer speed of say 867mbps. This detail tells me that my MacBook is corrected to the right node at the right speed and now if I'm not getting good Wifi its either the CHANNEL or the actual speed of the connection to my home. Again other mesh systems showcase this really well. Especially AMPLIFI-HD. But where you can go further is to make a device connect to a particular node. Example. If say I move from my bedroom to my living room, and my MacBook is still connected to the bedroom node, I should be able to via the app transfer the connection of the macbook from the Bedroom to the Living room node so that I get max throughput! If you can do this you have a WINNER ON YOUR HANDS as if you read online millions of people complain about this problem and have requested this feature for all mesh systems but no one listens!!!

12. Customization of the 5Ghz network instead of naming it ".speed". Really??? We should be able to call it whatever we want. So if my network is called "Multy X". At the moment the 5Ghz one is called "Multy X.speed". I may want to call it "Multy X (Fast)" or "Super-Fi" or whatever I want. Also we should be able to allot different passwords for each of the 2.4Ghz and 5Ghz networks. Give us that option as well please as I don't want my guests coming on to the FAST SPEED network and slowing things down unnecessarily. Again, its the little things that make the biggest difference!

13. Why can’t I setup multiple MULTY X nodes at once like Orbi, or Eero or Velop? With Multy I seem to be only able to do this one at a time. That makes this so difficult and cumbersome. You can cut your entire setup time in less than have if you allow one to setup multiple nodes together and optimise placement and signal strength for each node dur By the setup process!
14. Finally let's make the app more personal shall we.

a. Have a live chat feature that you don on your website within the APP. It makes much more sense to talk to someone in real time and solve their problems.
b. Allow us to keep a log of all our speed tests within the app. Right now we can only do one at a time. weird.
c. While the app looks okay its aesthetics can be more optimised for newer generations mobiles - we're in an age of the HD, if not 4K screen. Let's get some panache into it boys and girls. you're competing with the likes of EERO, AMPLIFI etc who spend a lot of time on Design. Orbi's biggest problem was that the app was bunny and even they did an overhaul to make it presentable. Yours is good but if you want to be the BEST you have to make your app look and feel like your product and packaging which was simply awesome!
d. Finally I have a question - when you launch the app, on its home page there is a download and upload speed shown, but sometimes I get this in kbps and sometimes in very low mbps. What does this depict? It's of course not the internet speed. So what speed does this showcase? Like I said the app is not very intuitive! I would rather have a nice home page that shows me tabs on where to go - i.e. YOUR NETWORK, QoS, SPEEDTEST, DEVICE STRENGTH, WIRELESS TEST, PARENTAL CONTROLS, etc etc. Much more user friendly overall from a navigation and start point of view.

Anyone else have any more thoughts? Please place them in the comments section below. Would love to hear your side of improvements too for the Zyxel team to take on board and implement. Overall this is one of the best wifi-mesh systems out there. In my opinion, a few of the improvements, if not all suggested above would make it unparalleled in every way in comparison to the competition.

Multy X support parental control, you can use this feature.